Galileo might have said “Eppur si muove!” Maybe. Probably not. But it’s a good quote either way. It’s Italian, and translates to “And yet it moves!” Galileo (might have) uttered it at his trial where the Church forced him to recant his support for Copernicus’s heliocentric for the universe. Like I said, either way it’s a good quote.

Music is soul-crushingly profound. It is a language that has no specific meaning attached to it. Eppur si muove! In other words, we commonly attach metaphysical associations and connotations to the experience of music. Even assessing music is a difficult task.

Individually, we all form opinions about what we like and what we don’t. We do it almost without conscious thought. Some even argue that we either like or dislike everything we hear. (Sorry, thats behind a pay wall but you should be able to read the abstract at least.) There’s no room for mere indifference! I’m not sure I agree, but the argument exists.

However, trying to speak more objectively about music is difficult. The study of art evaluation is called aesthetics. Typically, aesthetics is a branch of philosophy. And while some aesthetic paradigms make my eyes roll or my skin crawl, it’s all fine and well because these arguments are not meant to be absolute. They’re tools that have varying value depending on what your goal is, not unlike a real toolbox full of tools. People that want to argue about what is and isn’t art, or the value of a work of art are welcome to chase this unsolvable puzzles. Sometimes unsolvable puzzles are the best kind. But all too often, these arguments come from people that don’t seem to acknowledge that music exists outside of serious orchestral music or maybe jazz. Can we not talk about the kind of music that most people listen to?

As a musician myself, I’m firmly in the “intent” camp: if someone calls it art, then it’s art in my book. Now it’s just up to me to determine if I like it. Easy. Clean. Simple. Moving on…

But there’s a more sinister creature creeping in the shadows: it’s the empiricist! The empiricist thinks things can be measured and repeated and solved. And I’m one of them. And I understand the appeal of empirical study of aesthetics. How cool would it be to actually, truly define art? In fact, if someone were to take a very broad definition of aesthetics, you accuse me of being an empirical aesthetician because I study music empirically and make statements about people’s preferences. Typically aesthetics is about the ‘ideal’ form of art, not the interpreted. So don’t call me an empirical aesthetician. I’m not sure I’d take it well. Please. 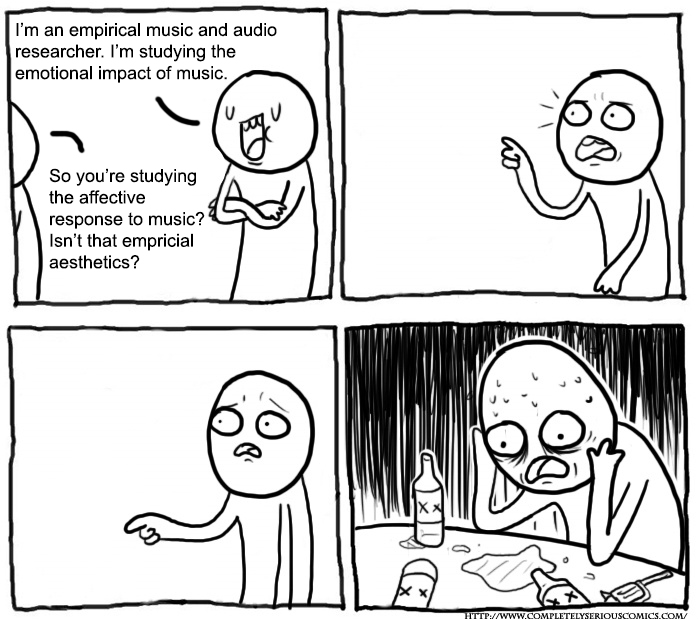 But why am I opposed to empirical aesthetics? Well, because eppur si muove! I feel confident that it’s possible to understand the underlying psychophysiological mechanisms and processes that happen when we experience music. And generally, I think the emotions experienced when we enjoy art of any kind are “real” emotions. The very same ones we experience in everyday life. They might be in novel combinations, but they’re the same overall. But I don’t think there’s a practical way to understand such a complex process as an aesthetic evaluation and resultant emotions, let alone what makes art optimal. I typically shun the metaphysical stuff, but art is something special.

There’s a model, called BRECVEM(A) that identifies the component parts that go into forming an individual aesthetic judgement. It’s massively complex with several overlapping layers. It seems logical, but mostly untestable as a whole. And that just about sums up how I feel about going “too deep” in empirical music work. There’s a practical limit to what is possible in the here and now. I look forward to new methodologies and new models, but for now I feel we’re stuck.

So how do I rationalize the empirical study of an art form when I don’t think the subject can even be described on empirical terms? Carefully. I focus on the communication aspects of mediated music, for one. I’m more interested in the function of music within a medium than the slippery obvious-but-impossible-to-define music. I want to know how people respond to mediated music. Yes, those results could inform how people design and create their mediated music, but don’t confuse the functional aspects with the aesthetic aspects.

Here’s a song from a particularly thoughtful band: Yellow Magic Orchestra. They’re Japanese, and started in 1977. The name is provocative: it’s a comment on the West’s tokenization of Asian cultures. A fun twist on YMO is that they felt like Japan was becoming infatuated with technology and the West and in turn, losing its cultural identity. So they decided to share this criticism by using brand new musical technology – sequencers and digital synthesizers – and write very Western-friendly pop music. A fair balance of it is in English, even. They certainly carved a unique niche out for themselves. Maybe, in some small way, I can do the same.

They are superb musicians and songwriters. Here’s an incredible instrumental from their 1981 album, Technodelic called “Light In Darkness.” Enjoy that bass solo. It’s old and wildly out of social context… and yet it moves.